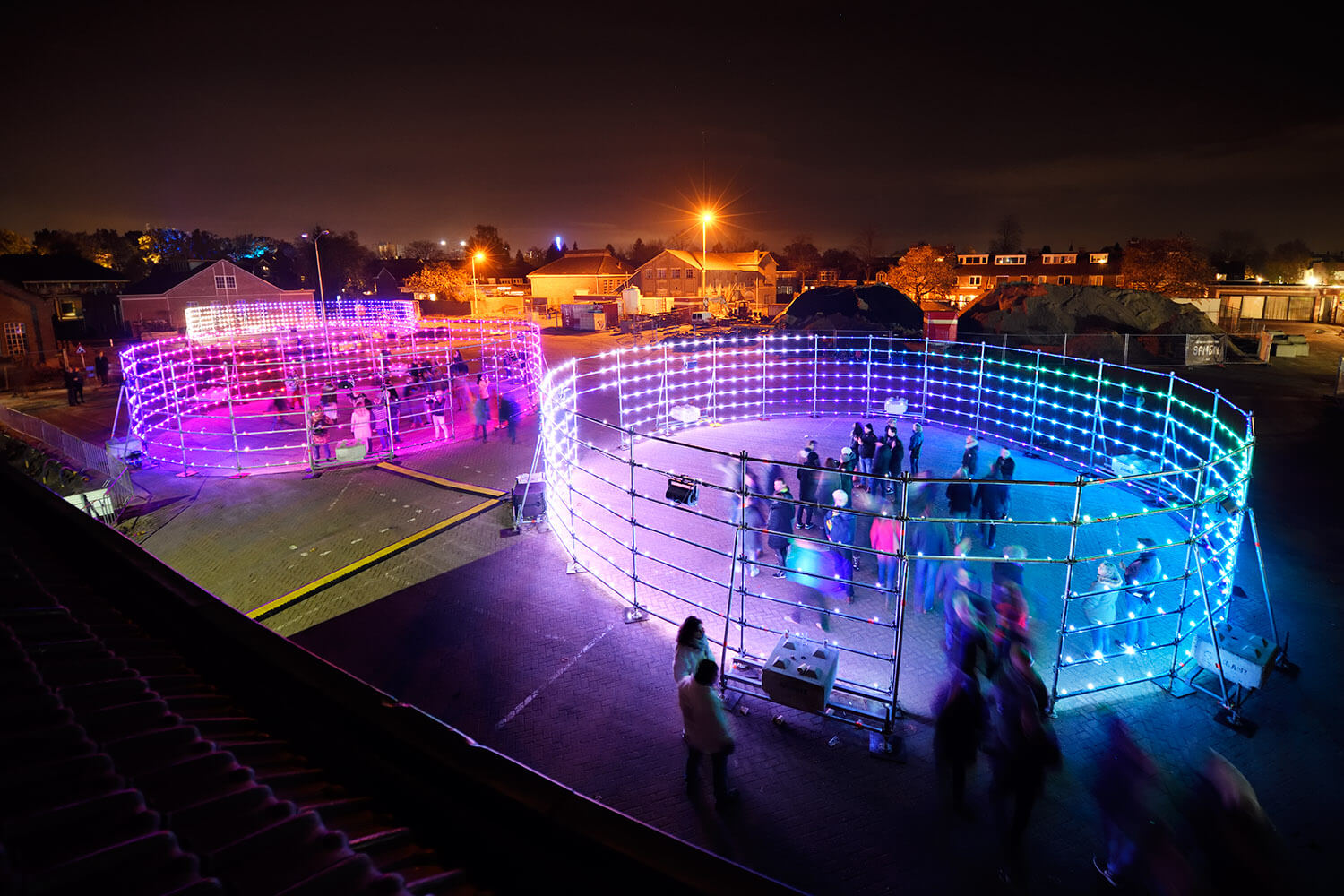 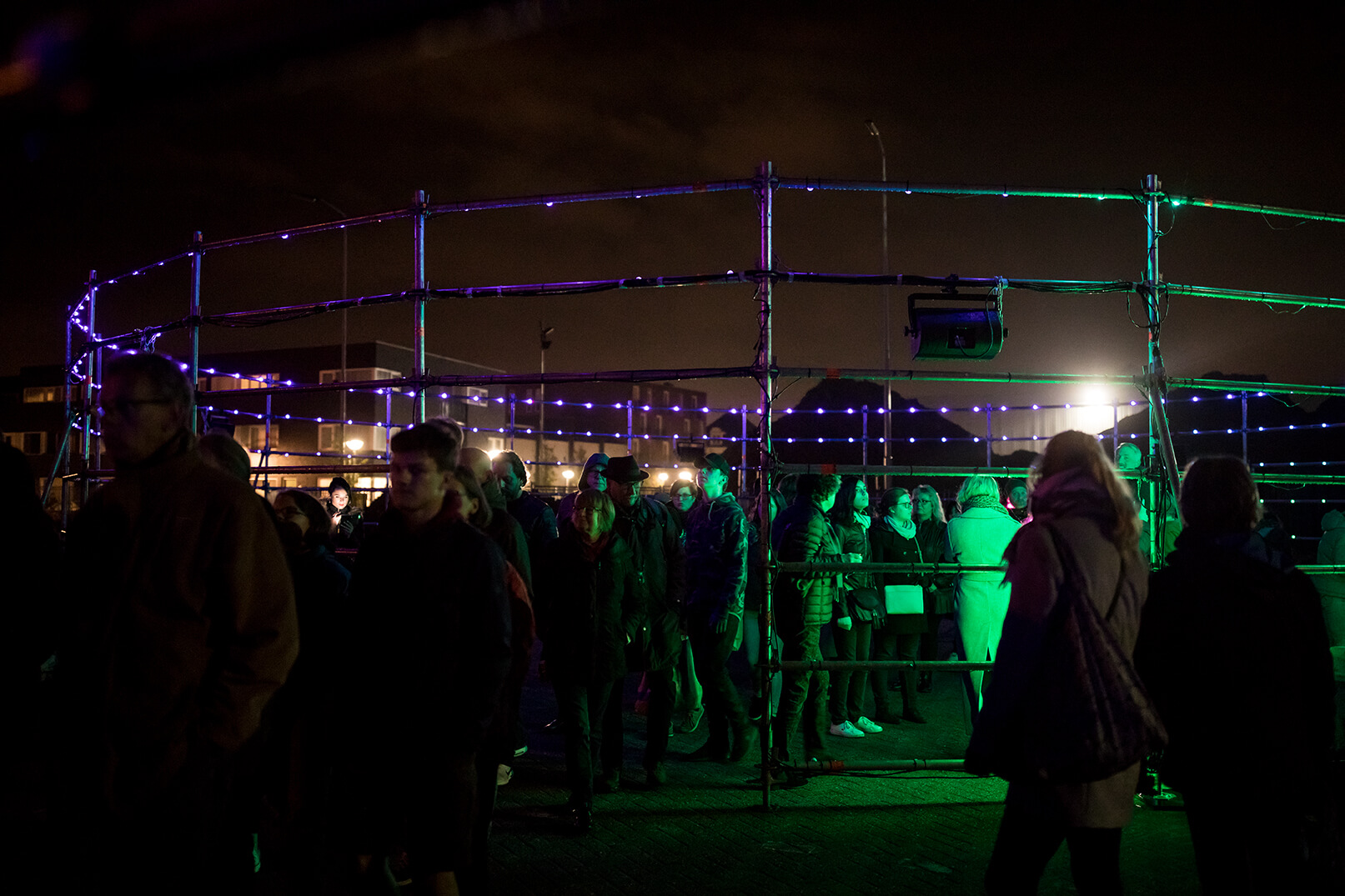 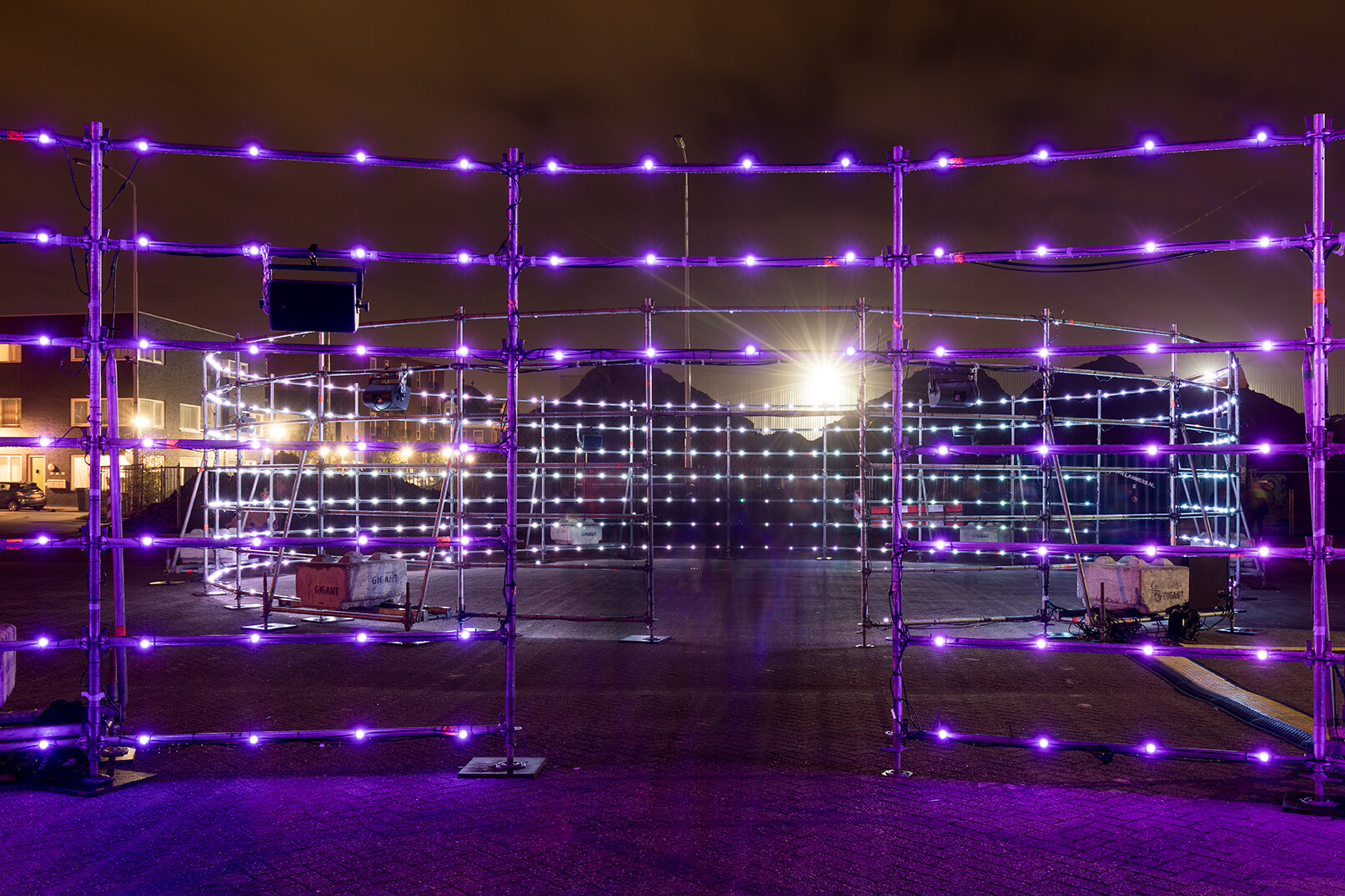 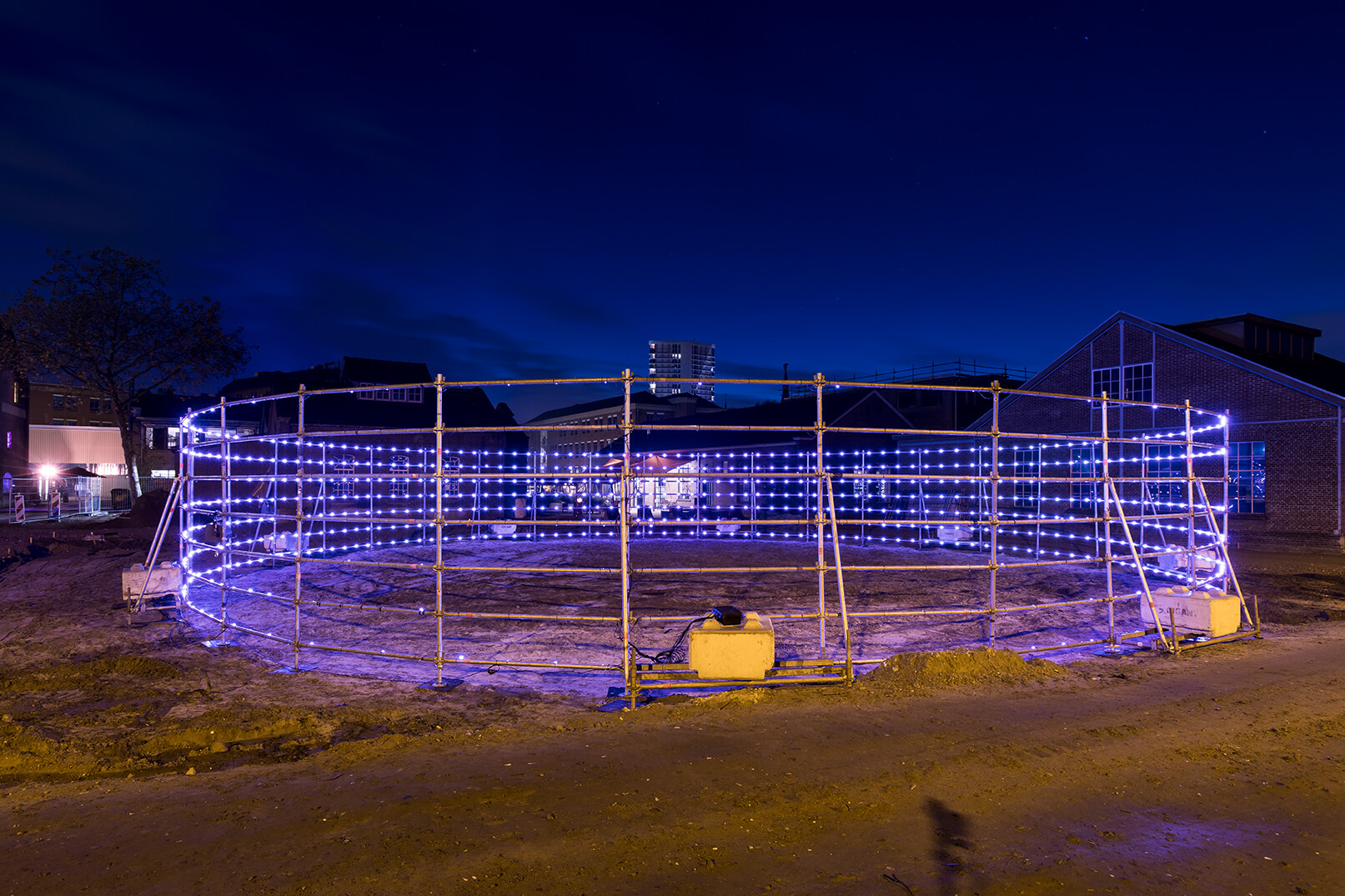 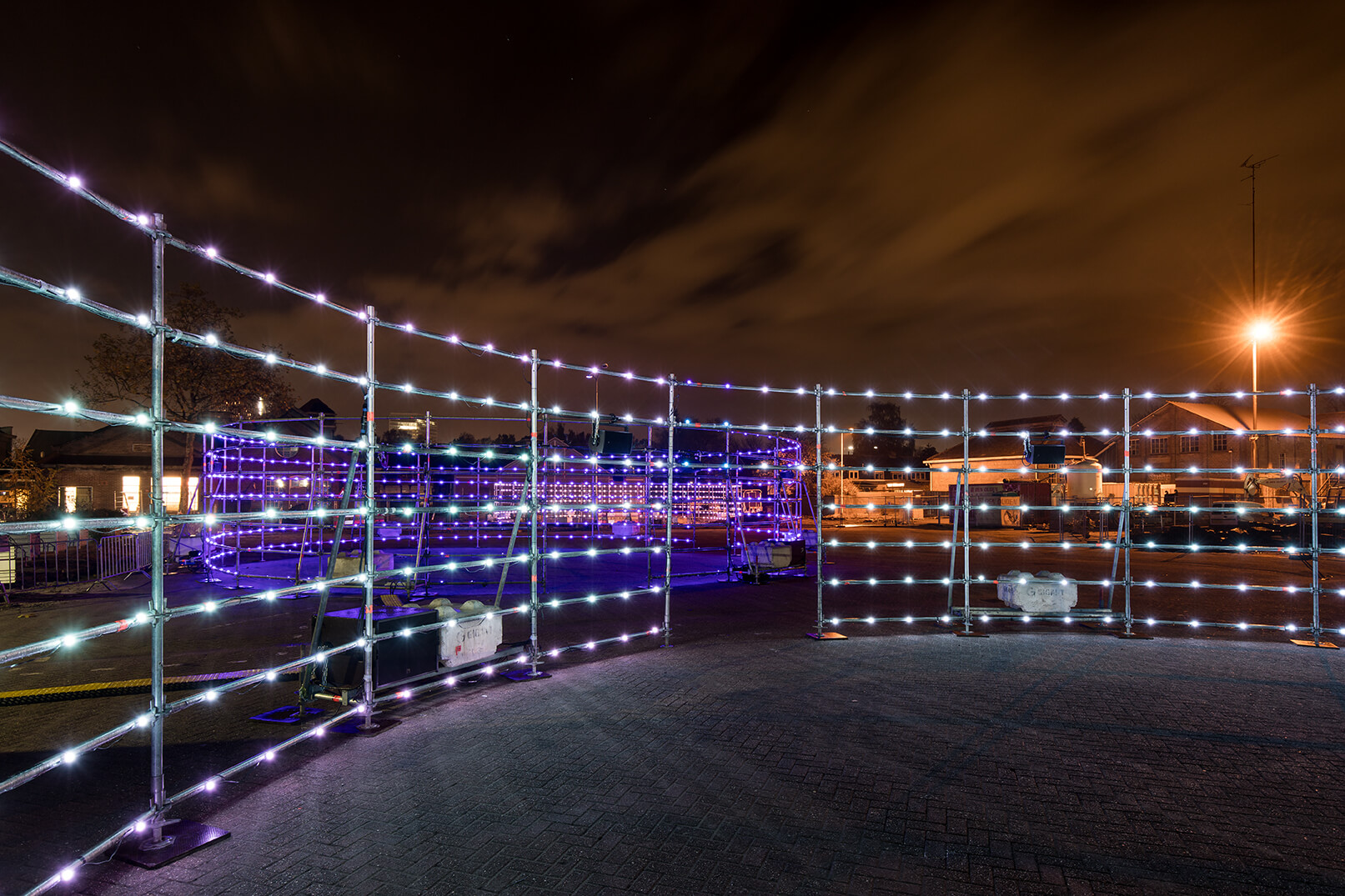 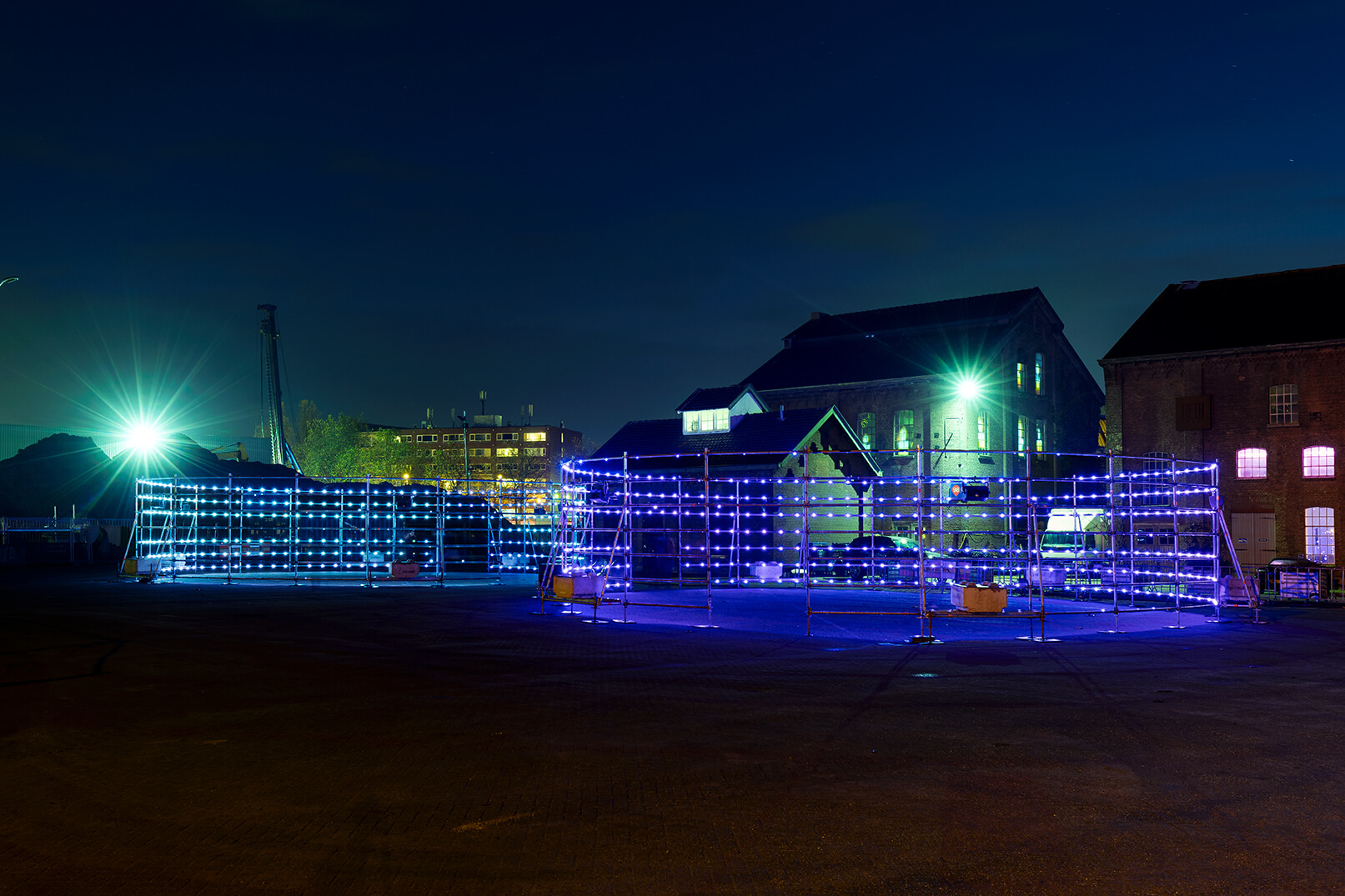 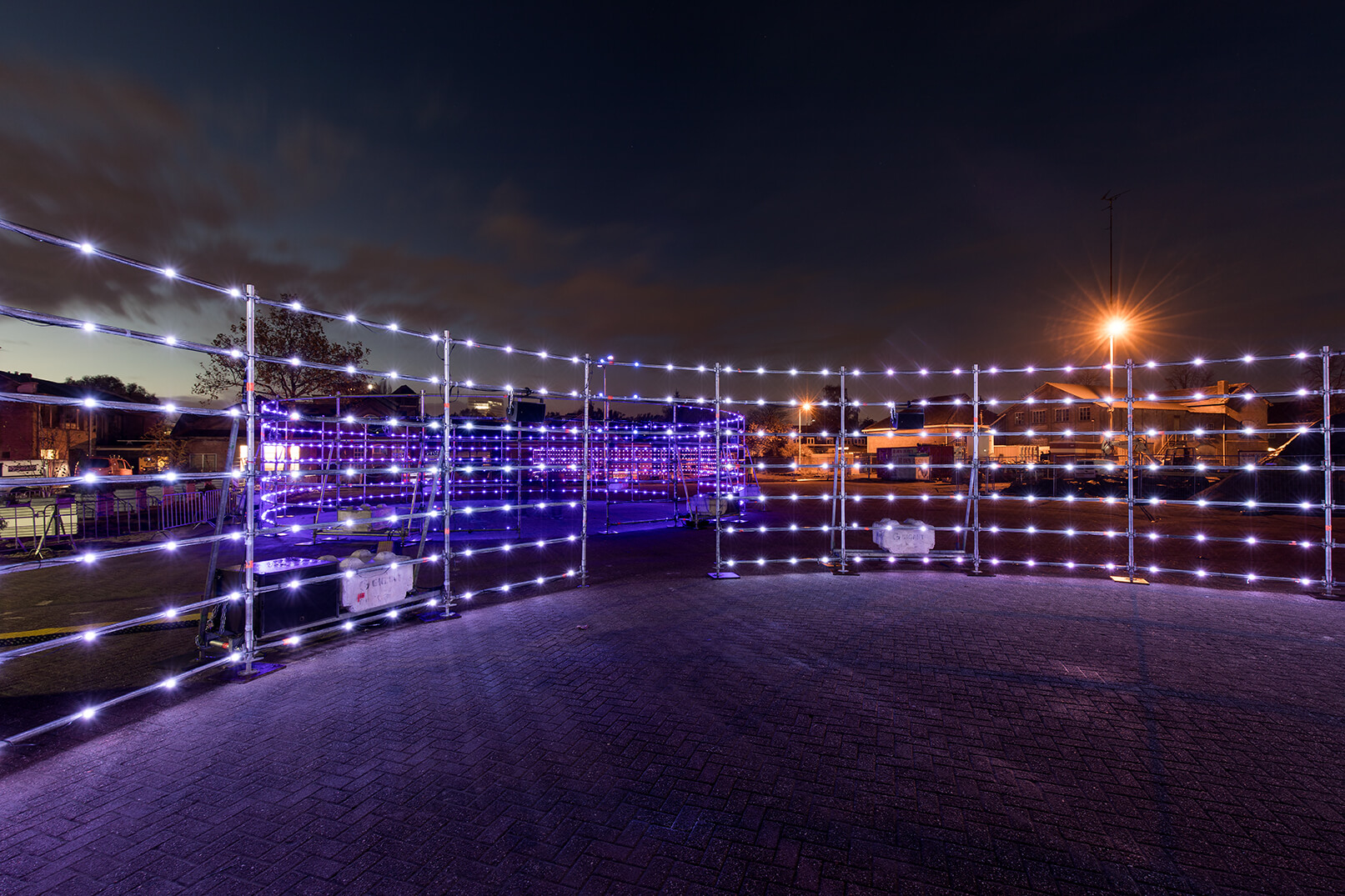 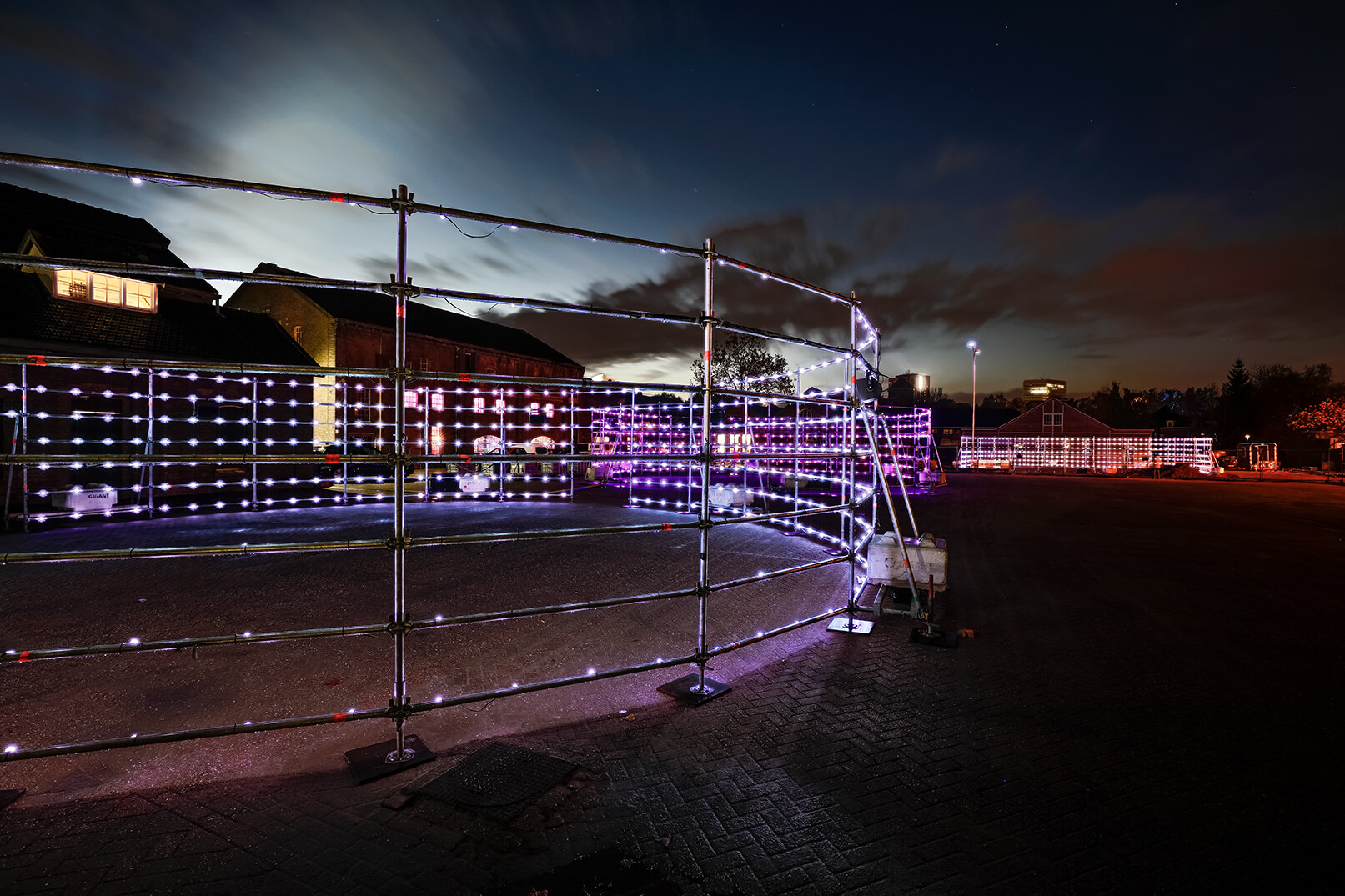 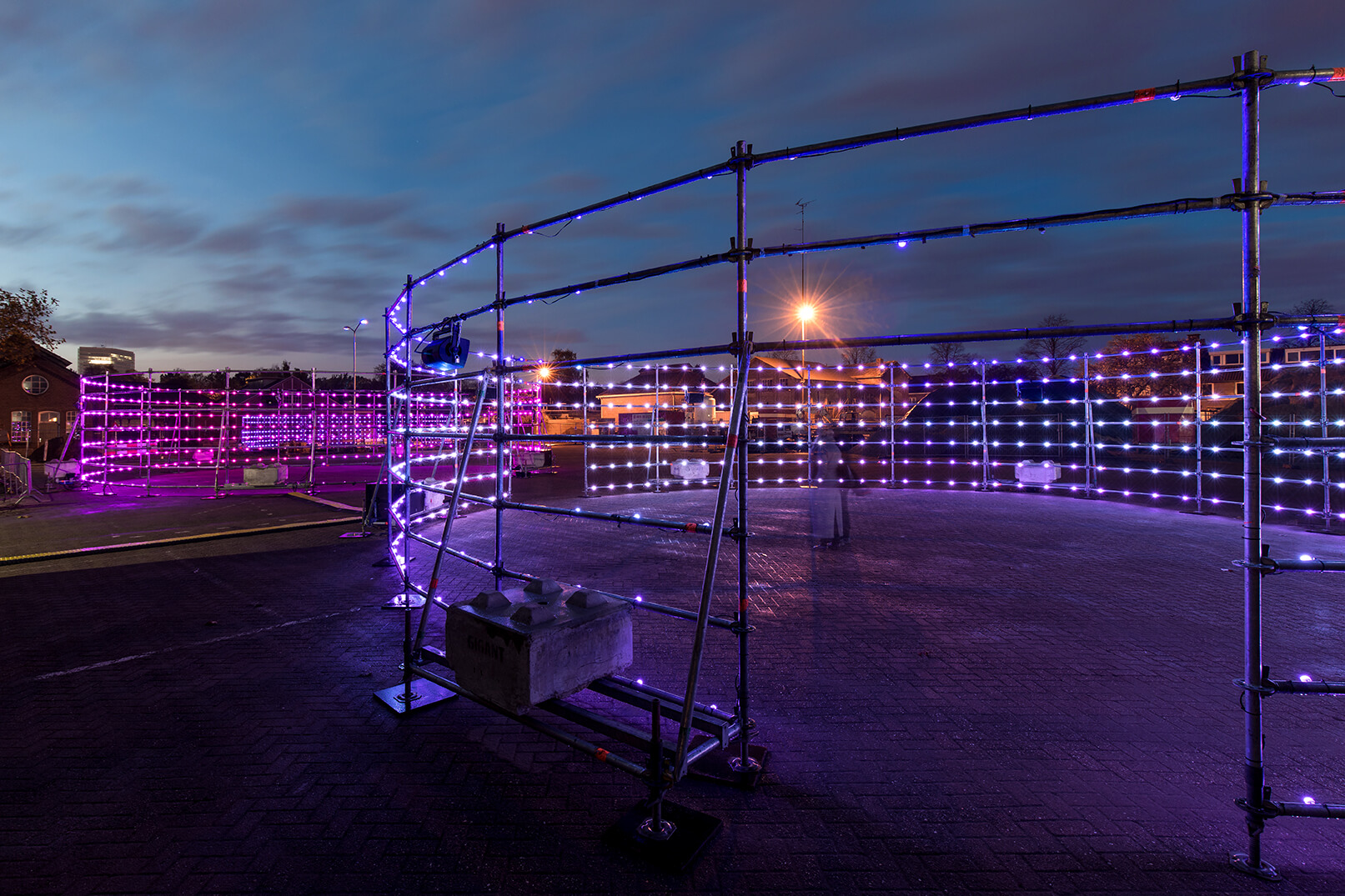 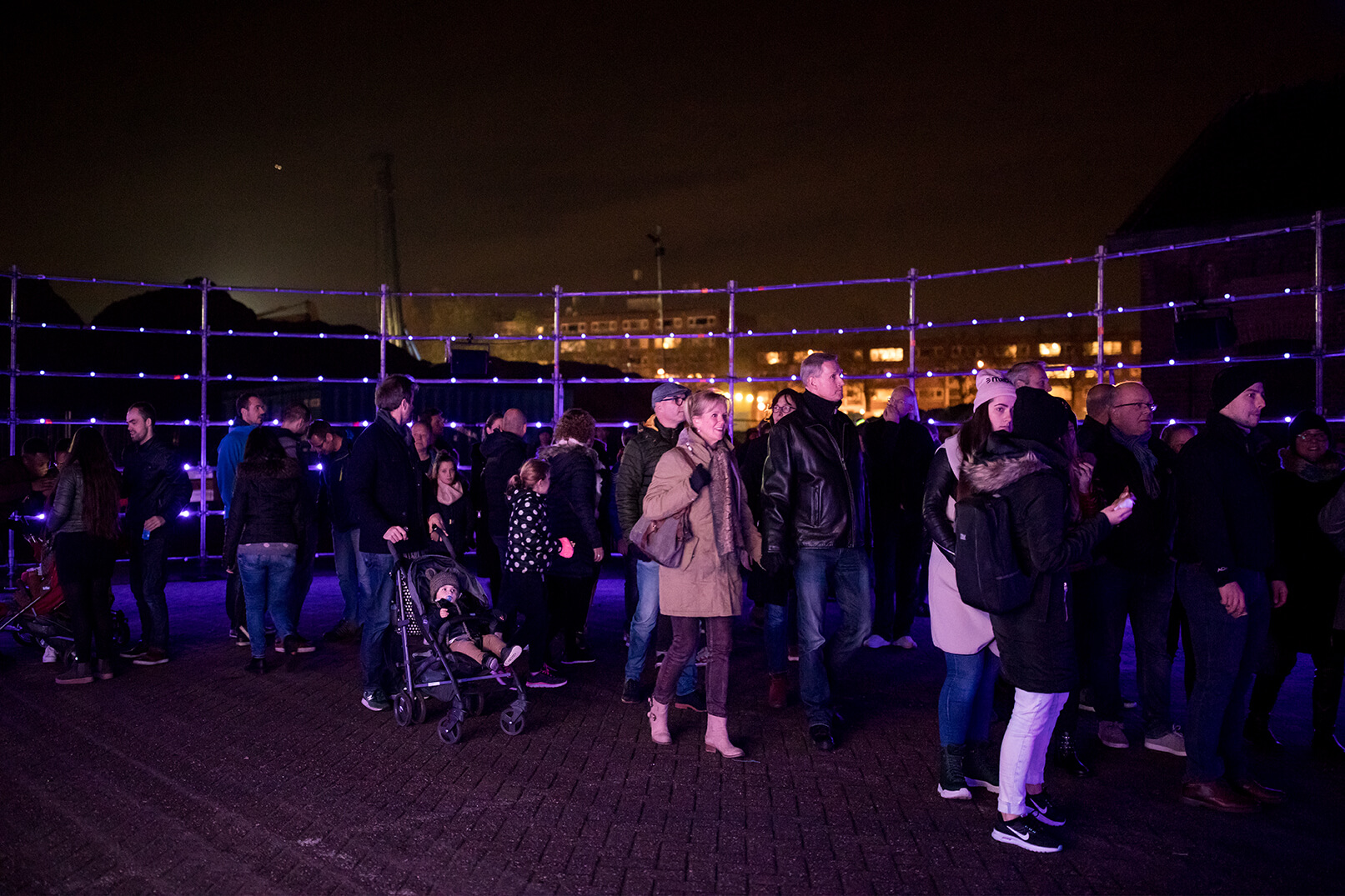 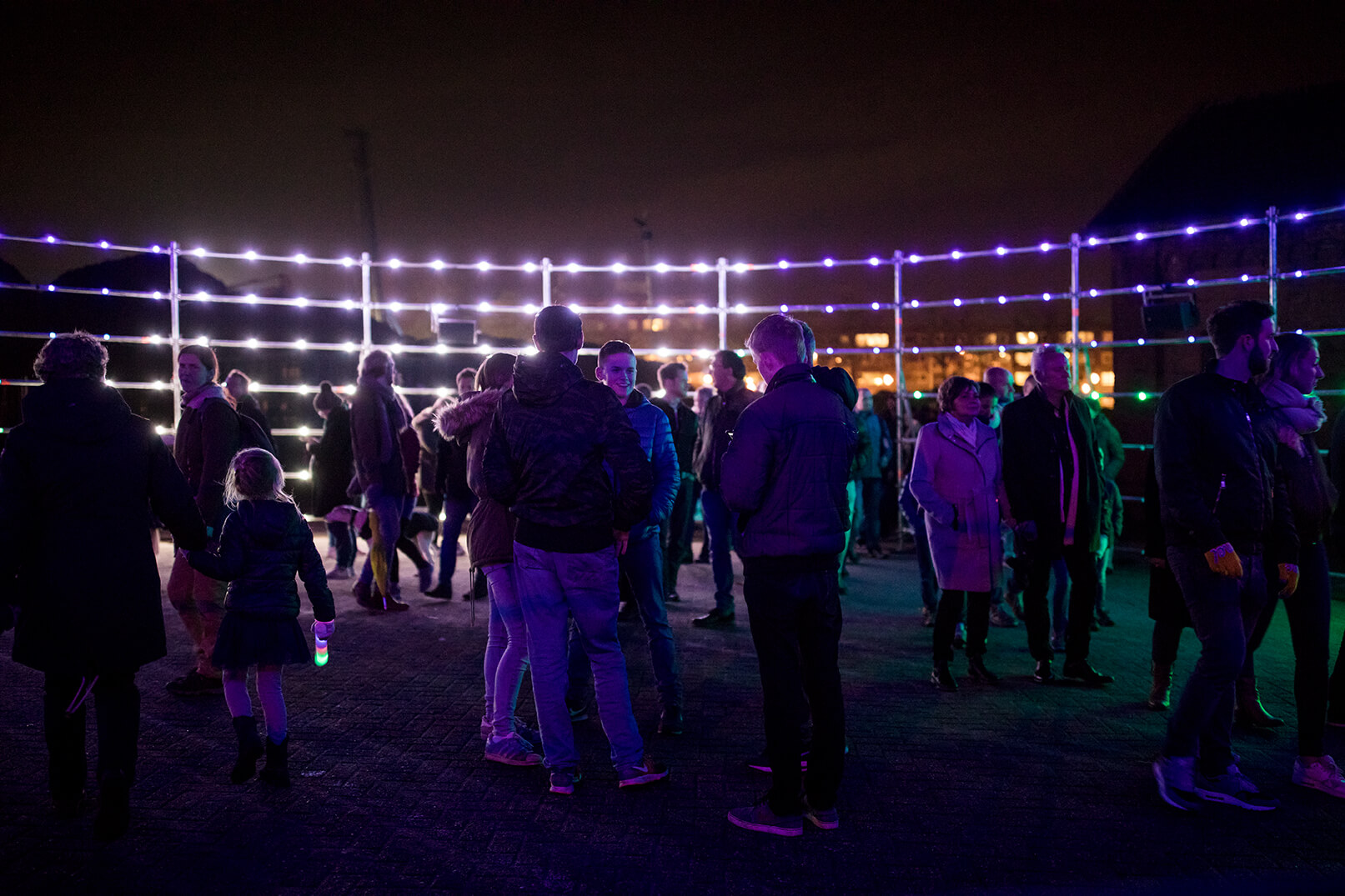 This installation acts as a highly intuitive apparatus that allows anyone to experience loop-based musical compositions. As it were Loops pay a tribute to the music lab of the 50’s and 60’s where experimentation with analogue magnetic tapes built the ground for modern music making. Vorwerk’s lab, however, is not an enclosed studio full of experts. It is out in the open, anywhere in the public space.

Audio loops are, just like sequencers and synthesisers, the main ingredients for todays electronic music.

The light artwork “Lichthouders” was based on the gasholders, formerly located on the NRE site in Eindhoven, in the shape of large, round storage spaces. Round, metal constructions of light elements placed on top of their historical ‘footprints’. These circulair elements display sound loops.
The concept of using sound loops and making them visible is inspired by the sound experiments done by Philips in the 60’s by artists like Dick Raaijmakers. We created three “Lichthouders”, two with a diameter of 15 meters and one with a diameter of 21 meters, all have the same 3 meters height. Each object contains several hundreds of led pixels.
Every circle contains several audio loops and play in random order but within their sound composition. The audio loops are in sync with light animations so the movement and sound is directly visible. Using a 6 speakers setup, the sounds are all moving around the public, creating a spactial hearing.

The aim is to connect people in the real work, in this time, in this place and create a unique experience.

Its simple and elegant form together with vibrant light animations create a corresponding visual reflection of the soundscape lab created by the computer algorithm, and form an unusual audio-visual spectacle.

For the Abu Dhabi Science Festival I created a new interactive version of “Lightholders”. The big metal round structure displayed scratchable audio loops controlled by the festival visitors.
Used for this setup, 700+ RGB leds, a 6 circulair speaker setup and custom build controllers.