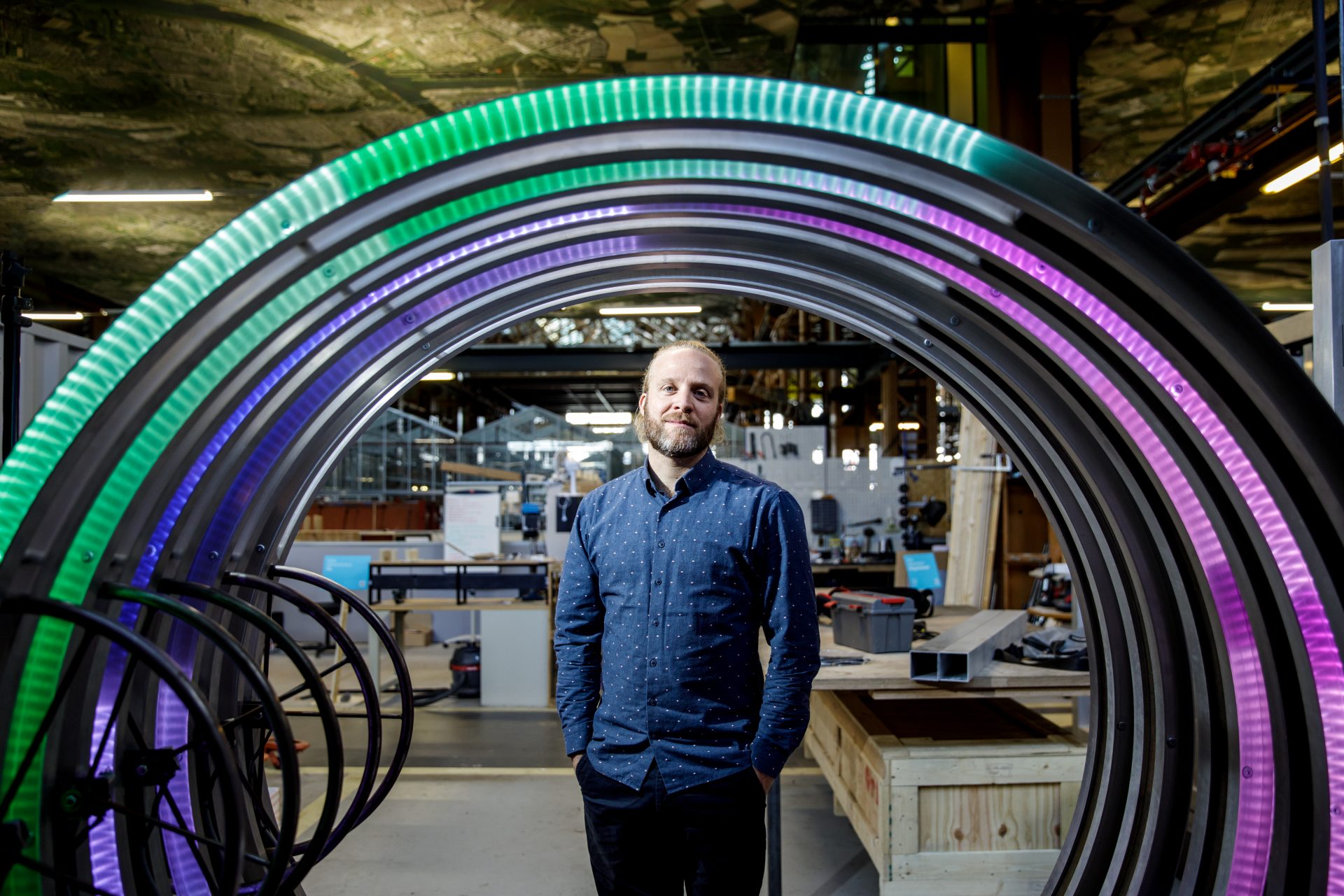 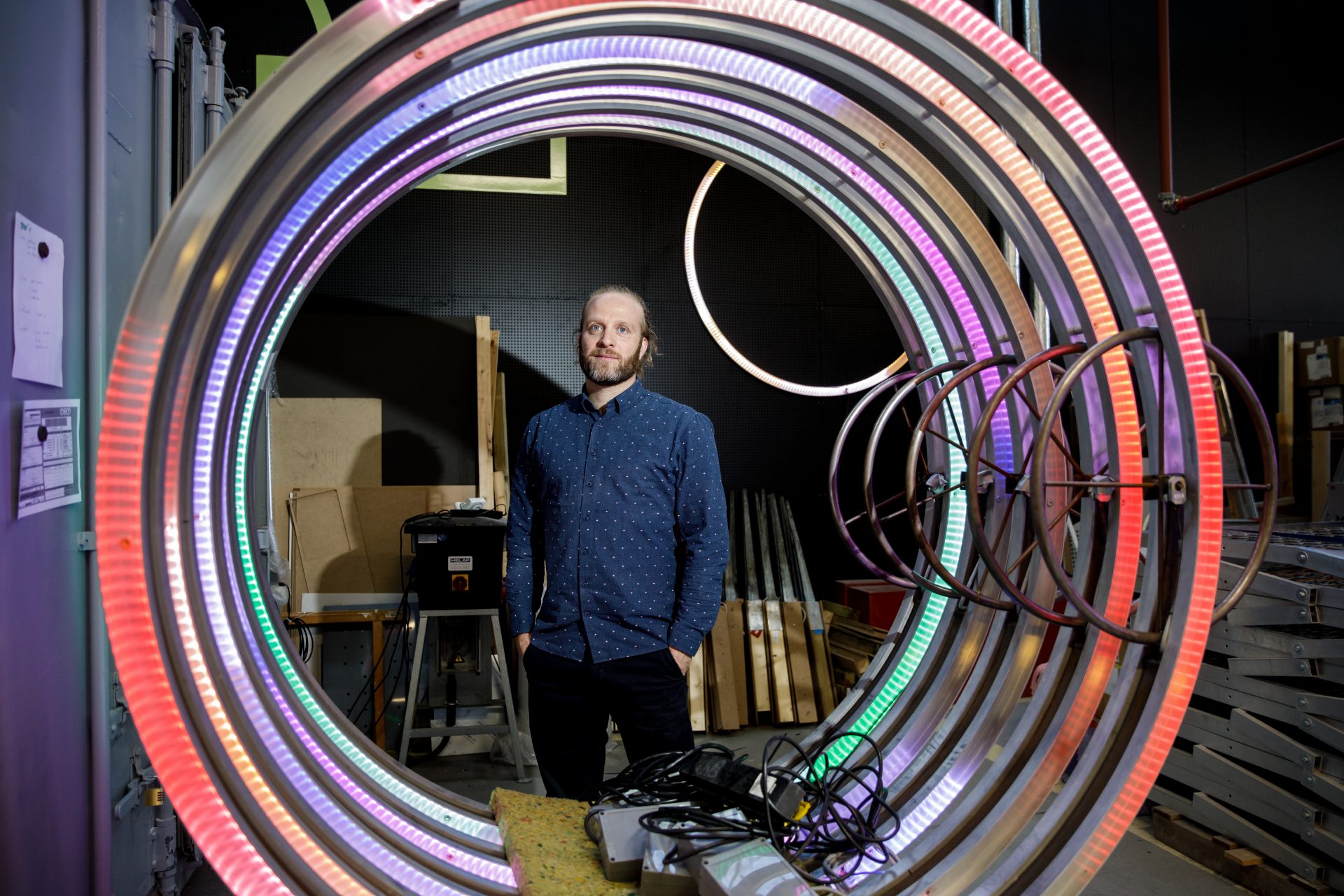 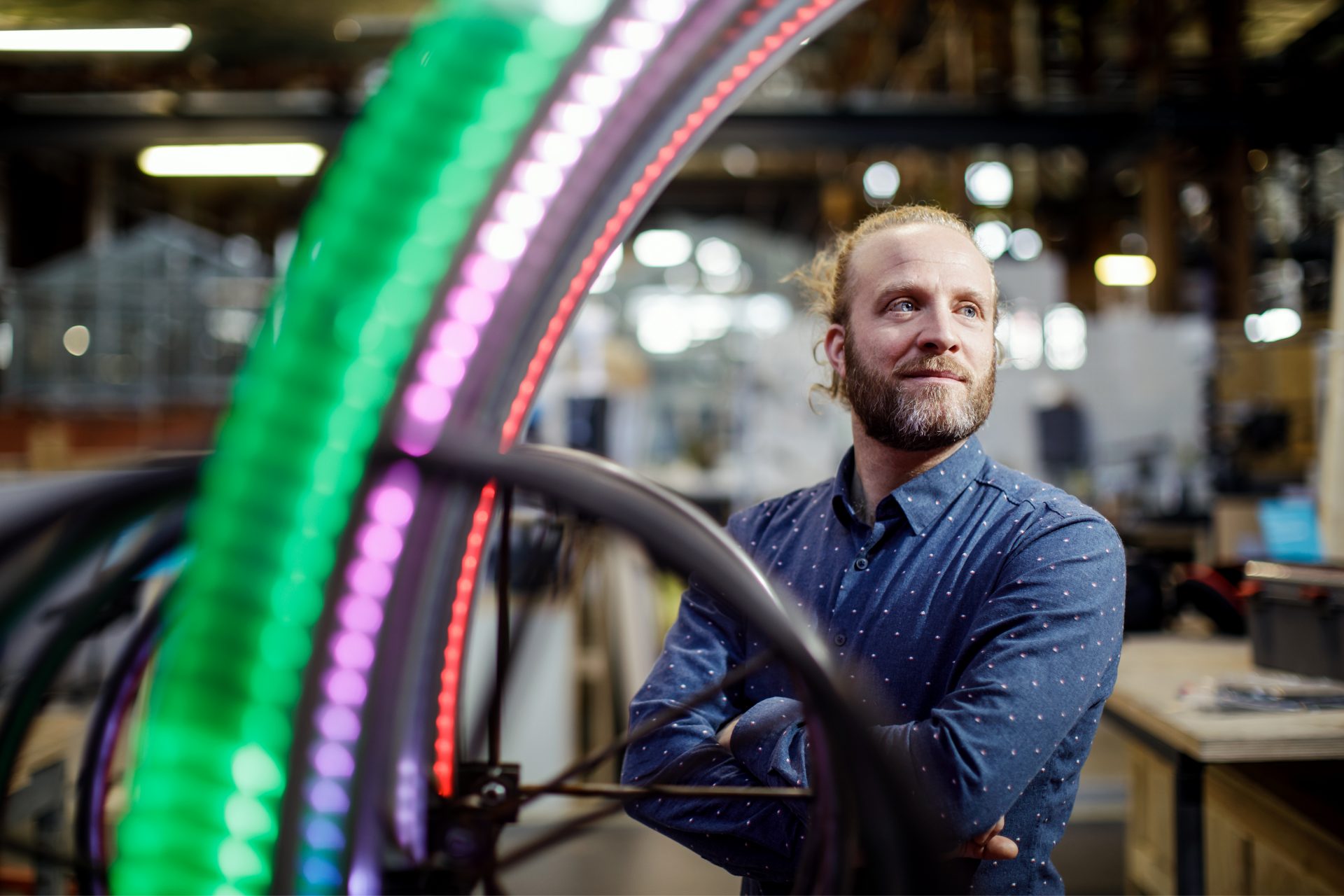 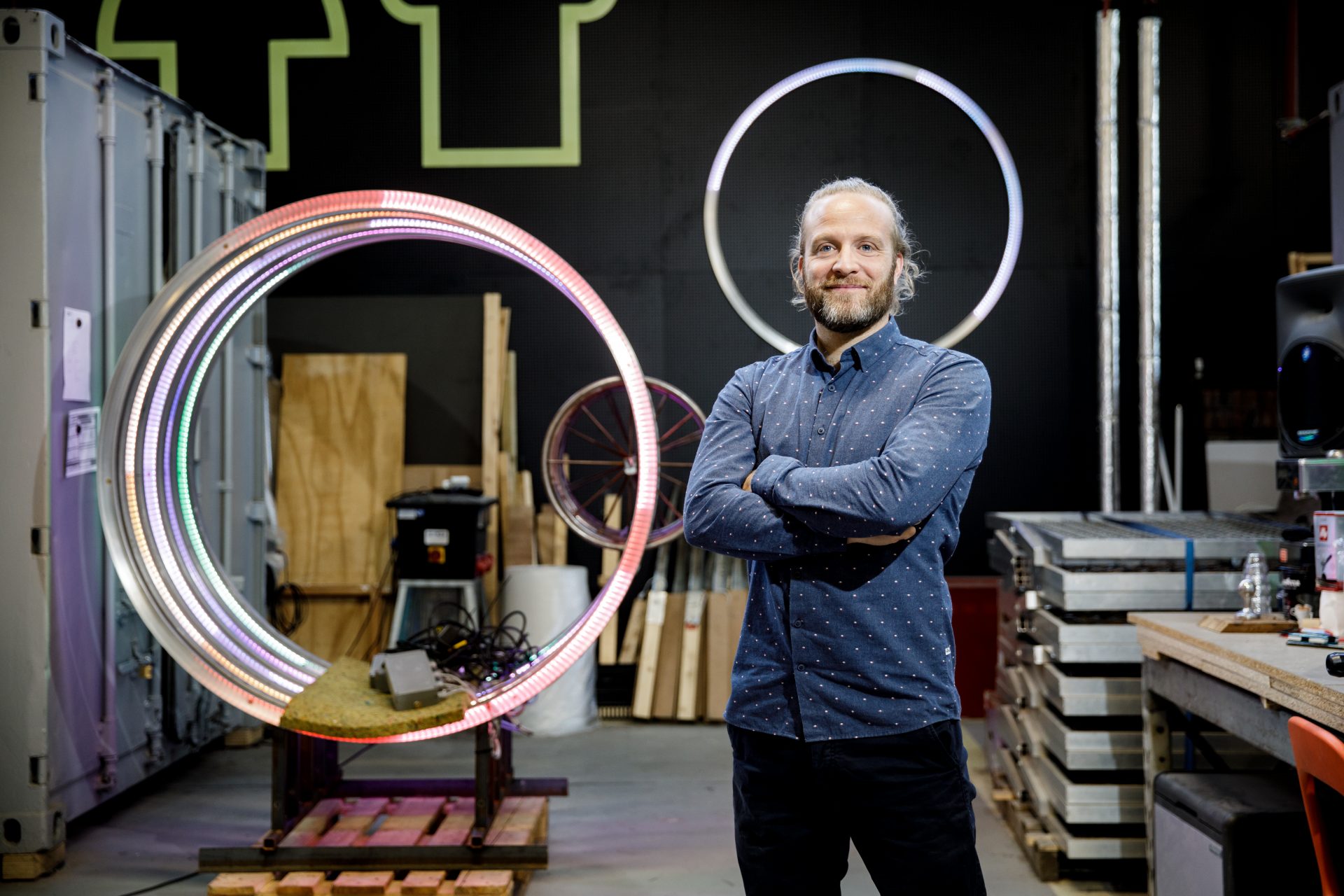 We need imagination. We need risk taking. We need curiosity and we need criticism. As Rotterdam is on a quest for the next economy, our city must keep posing questions. The Next Economy is not a simple rollout of renewables and random smart tech, it holds the challenge to come up with fully new economic models and bring them to our people. We are not there yet. Who takes the leap?

ART TO INTERACT AND PLAY WITH

The artwork of multimedia artist Jonas Vorwerk intrigues bystanders. They almost instantly start to play and interact with his works and each other – without instructions. He exhibits across Europe and the rest of the world.

Loops (2017) has just returned from a short England trip. This recent work of art had featured in the Light Night Leeds festival. The five pieces, each consisting of a small metal and big aluminum ring – the latter being 160 cm in diameter – now rest on a pallet, tightly wrapped in plastic foil. Several of Vorwerk’s creations are hanging on the meters high walls of the RDM Makerspace, a former shipbuilding location. Windorgel (2009), an instrument consisting of sixteen man-sized aluminum rods, sensors and a MPC drum machine, has been squeezed into a corner of his rented plot.
Loops / Fotograaf: Ruben Hamelink

Vorwerk (40), born in Eindhoven, has been working as a multimedia artist for several years now. His artwork has been displayed at several major (light) festivals, such as GLOW in Eindhoven, but also in France, Finland and Colombia. He’s an expert in combining light and sound with digital and analogue technology. ‘What I do is enlarge a certain principle’, he says. ‘Loops is only about audio loops, for example. I am interested in what happens when you shorten or lengthen them. And what does it look like when you make it physical?’ The outcome always is super practical. Visitors can touch the objects and help each other while trying to figure out its workings.‘I want you to experience, investigate and play. It’s playful interaction.’

Another important element: Vorwerk always wants his projects to be a bit more intelligent than people might expect. Like the 51 luminescent square Pixels (2011) which show collective behavior by passing on each other’s status. When they all “sleep”, they switch to the same color and begin to pulsate. If you pick one up, you can use that one Pixel to control all others. Vorwerk uses radio communication, for example. He manufactured and installed all necessary electronics himself.
Loops / Fotograaf: Ruben Hamelink

Each of his projects is preceded by an intensive period of researching and testing. ‘Causing interaction is always a starting point. My work has to be inviting. That is why it must feel, look and work properly.’ He also ensures that his artwork always has several layers. Only pressing a button is not enough. People get bored quickly if there is nothing to investigate or play with.

Loops is a great example. In preparation, Vorwerk spent one month in a French castle. Accompanied by a pile of LED’s, bicycle wheels, small but powerful Arduino computers and Ableton Max for Live software. ‘I’ve done all sorts of experiments on how to magnify the principle of audio loops to a work of art’, he says.

No matter where it’s shown, Loops almost instantly causes a reaction amongst the crowd, Vorwerk has learnt from experience. First, people are lured in with light effects form the big aluminum wheels. When it’s not used, short audio samples are played. Bystanders soon find out that by spinning the small metal wheels, different audio loops and matching light effects are activated. Several pre-programmed and randomly changing samples can be played forwards or backwards at a certain pace. If four others do the same, they together form an unpredictable symphony of hi-hats, snare drums, kicks, synths and basses.

His biggest source of inspiration is electronic music. Vorwerk performed as a DJ for a long time. Who also inspired him, is the late Dick Raaijmakers, who is regarded as a pioneer in electronic music. In the mid-fifties, he formed sound sequences with home-made sound equipment in the Philips NatLab. Later on, Raaijmakers created graphic images of the patterns he produced. Vorwerk took it a step further. Arduino microcontrollers convert what has been measured by sensors into pre-programmed light and sound effects.

Since he’s not a technician or a hardcore software developer, Vorwerk has had to mostly teach himself. Take programming as an example. An important basis for this was laid at the Willem de Kooning Academie in Rotterdam. As an Interactive Media student he and a handful of fellow students had access to a basement full of devices: computers, printers, speakers, cameras, Mac computers. ‘The facilities were very good. We were allowed to experiment with almost everything.’ His approach also means a work of art is never really finished. The artist, who graduated in 2006, is always on the lookout for improvements such as new sensors.

Experimenting with new technology and unstable media sometimes causes unexpected encounters. For instance, the time that inspectors from the Dutch Radiocommunications Agency showed up at his workspace. Something had disrupted the frequency band through which all ships communicate their positions on the river Nieuwe Maas. The powerful LEDs Vorwerk used for Circle disturbed the other radio signals. His electrical wiring functioned as antennas. After a befriended expert was called in, the problem was quickly solved.

His most recent work, Lichthouders, is by way of exception not an interactive production. Vorwerk created three circular elements on the former NRE site in Eindhoven, which resemble demolished gas holders. The largest has a diameter of 21 meters. Three-meter-high metal racks on the side accommodate several hundreds LEDs. Visitors stand right in the middle of the installation, while several audio loops, created by the sound makers of Walvisnest, play in a random order and are synchronized with the light effects. At the 2017 GLOW festival in Eindhoven it was awarded the Foederer Talent Award.

Vorwerk exposing his artwork outdoors is no exception. He refers to the green chairs in a Paris park, near the Eiffel Tower. Park visitors can use them at their will. ‘It touches the essence of what I find important’, the media artist says. That’s why he never gives instructions to visitors at places where his objects are present. Often things go well. ‘Last week, Pixels was in Finland, on a city square. Children were actually throwing them around.’ Yet, he didn’t intervene. In an offer he submits to an organizer, he always takes into account the collateral damages.

Vorwerk, who has been an entrepreneur since 2002, succeeds better and better in living from his art. Three of his works are currently travel around the globe. They are usually booked by European art festivals. Occasionally he also works as a web developer. This ensures that he can keep making his artworks independently. Vorwerk: ‘You always have to keep it personal. That is what makes art better.’